Serous otitis media is an inflammatory process that occurs in the middle ear, behind the eardrum. Fluid accumulates in the tympanic cavity. This is the so-called initial otitis media, which can later turn into purulent otitis media. Pus can get through the eardrum, and the next stage of the disease will develop.

Serous otitis media is one of the most common ENT pathologies in children. Most often it occurs in preschool age children - up to 6-7 years.

Causes of the disease

The main reason for the development of serous otitis media is runny nose, which can be associated with the presence of a viral infection, as well as with adenoids (in children). Since the organs of hearing are directly connected with the nasopharynx, the Eustachian tube (which connects the cavity of the middle ear with pharynx) can become overflowing with mucous secretions during a cold and cease to fulfill its functions. In this case, the fluid accumulates in the middle ear cavity, cannot escape naturally and causes inflammation.

Serous otitis media in children develops quite acutely and quickly. Usually this happens at night, the child cries, points to an aching  ear. Such symptoms are a reason for immediate contact with a pediatrician or otorhinolaryngologist.

Can I start using ear drops on my own?

If a child has an aching ear and nothing flows out of it, one can drip drops with an analgesic and anesthetic effect. But the best decision is to show the child to the doctor as soon as possible. If necessary, you can give an analgesic - Ibuprofen or Paracetamol.

What must not be done in case of serous otitis media

With serous otitis media, it is prohibited to warm the ear (with blue lamps, boiled eggs, etc.), make compresses. Warming up can be effective only at the initial stage, up to 1 day, but in this stage the disease is extremely rarely to be detected.

What happens during serous otitis media: the stages of disease development

1. The initial stage. Not accompanied by symptoms. The patency of the auditory (Eustachian) tube is impaired. In children it is asymptomatic, and the diagnosis comes up on second stage with acute pain.

2. The second stage. Develops in 4-7 days. There is congestion in the ear, pain.

3. The third stage. Fluid appears behind the eardrum. It begins to put more pressure on the tympanic membrane and cause more pronounced pain.

4. The fourth stage. If treatment is not started, the fluid may transform into pus, which has a more pronounced inflammatory effect. Intracranial complications, such as meningitis, brain abscess, can sometimes develop in children.

Otitis media can be diagnosed by a general practitioner, a pediatrician or an otorhinolaryngologist performing an otoscopy.

ENT doctors perform tympanometry – measurement of the pressure behind the eardrum. The patient hears a certain sound in the ear, and the doctor receives information about the presence of fluid in the middle ear cavity and about its nature, if any. Most often this study is used in children. In adults, fluid is often visible upon visual inspection.

Treatment of serous otitis media in children and adult

In children, the development of the disease proceeds very quickly, so in case of earache in a child, be sure to immediately address  to a doctor - pediatrician or ENT specialist.

Children under 1 year age with serous otitis media are necessarily prescribed antibacterial therapy (antibiotics), regardless of whether there is intoxication, fever or abnormalities in the common blood test. This is due to the peculiarities of the child anatomy, to the inflammatory process progression, which can turn into the next stage within an hour.

Otitis in adults does not always require antibiotic therapy. Serous (catarrhal) otitis media in adults can be treated with ear and nasal drops. During the disease, flights are not recommended due to pressure changes, which can adversely affect the condition of the eardrum.

Depending on the stage of otitis media and the patient's age, treatment can be conservative (medication) and surgical. 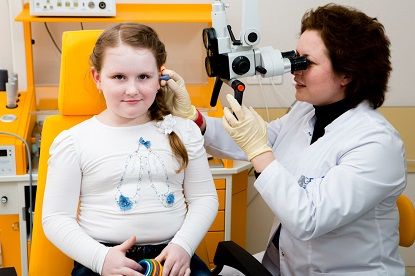 • treatment of the nasopharynx to unload the auditory tube, relieve swelling;

• sometimes drops in the ear are prescribed;

• if antibiotic therapy is prescribed, ear drops are usually no longer necessary;

• you can add gymnastics for the auditory tube, gum chewing, blowing, etc.

If the effectiveness of conservative treatment in a child is absent, namely, when intoxication, pain and fluid in the ear remain, surgical treatment is used.

In children, we can observe the presence of fluid and treat conservatively for 1-1.5 months. During this time, the fluid will not become dense and will not interfere with the movement of the auditory ossicles in the ear.

The operation includes puncturing the eardrum under a microscope and installing a drainage - a shunt, tubule. They are silicone and allow the outflow of fluid from the middle ear. The point of the treatment is to allow air to appear in the ear cavity and avoid hearing loss. The tubes are in the ear for different periods of time - from one month to a year, and even longer. Sometimes they fall out by themselves when the inflammation is resolved and the function of the ear is restored. Or we take them out after a while on our own.

To prevent the appearance of serous otitis media, you need to pay more attention to the nose. If an adult can tell in detail about his complaints - nasal congestion, problems with blowing his nose, the child cannot always do that successfully. Do not rinse the nose of a child under pressure; use saline to rinse and moisturize. Children must be taught to blow their nose, try to use aspirators less.

Mr. Tsilenko was quite well with the solution of the my son's nail problem ( read more )

Mr. Tsilenko was quite well with the solution of the my son's nail problem ( hide )

Program for the diagnosis of sleep disorders